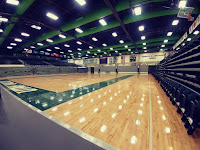 Once I got my new toys I was anxious to try them out and flex my new wireless abilities. I wanted to try a high density deployment so I grabbed the floor plans for the Lockhart Arena. It is the smaller arena at UVU with seating for around 2000 and occasionally gets used for other functions like graduations where they have a stage at one end and fill the floor with chairs. Threw the plans into Ekahau and used my newfound skills. I used Cisco 3800's with external antennas and two different models of Terrawave antennas in the design. A limitation with Ekahau at the time was I couldn't use both 5 ghz radios on one AP so the ones I wanted to use dual 5 ghz radios on I ended up stacking two AP's in the design and disableing the 2.4 radio on each of them. They have since fixed that problem. The design included high density capability on the floor also for the times the space is used for functions beside sporting events. I ended up with 10 AP's and 17 antennas. I pitched the design to my director and got it OK'd by the powers that be and we started the project. The phone guys pulled the cables and we mounted to AP's 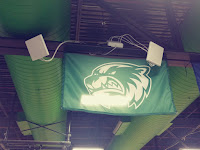 and antennas to the steel beams spanning the arena. We were also able to use a Catalyst 3850 Mgig switch for the access layer. After the install I did my very first validation survey, with a laptop in the days before Survey for iPad, to make sure the signal strength was correct and that devices would roam between cells. The first large scale function they had in there I was watching everything and noticed the AP's were balancing out evenly and thing seemed to be going well. Since we had a 10 gig uplink to the switch the most we ever did was 6% utilization on the uplink. The day I learned about overkill. Well at least I'm future proofed for a while. 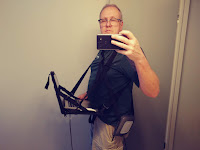