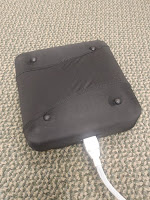 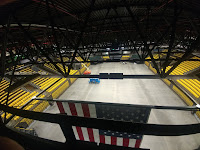 As luck would have it, not long after I submitted my design for the arena we got called into a meeting with the management team of the UCCU Center. They had just landed a contract with ESPN to have the Olympic finals for gymnastics there (Pre-Corona virus). They asked us if there was anything that could be done to improve the wifi in the arena bowl and we just happened to have a nice Ekahau report printed out with the design specs that we handed them. My director told them how much it would cost and a time frame for the install. A week later we were notified that the design had been approved and they had the money to proceed (funny what the opportunity to be on the national stage can do for a budget). We ordered the equipment and everything was a go. Then the whole world shut down. But all of the stuff arrived  and we had a lift rented and no one was in our way so we decided to go ahead with the install. One of the stipulations with the install was that everything we put in had to be black because it was in the ceiling and they didn't want anything to stick out. We were able to get black Cat6a but I had to get a little creative with the AP's and antennas. We thought of getting enclosures for the antennas but didn't have enough lead time to get then built, so I ended up painting the antennas flat black and we bought some black stretchy swimming caps from Amazon to put 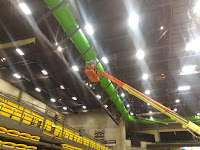